FLORIDA – JUN 2011
We’re heading out today for our trip to The Florida Keys.  I’m so excited and R’s excitement is off the map!  I’m relaxing before we head out and he’s out side somewhere burning off some steam.  He’s walking or something, he wasn’t sure what he was going to do.  He just left and said he’ld be back in an hour — I love travelling with him, he’s great fun and we always come home with lots of smiles and stories to tell our friends and family.
Stay posted!
Left Campbell River this afternoon, there was some poor old fella and his wife in the line-up to get on our plane and he was all geared up to get on the plane when the attendant noticed that it was the WRONG plane – this means that they would have ended up at the WRONG terminal in Vancouver and that would have made the next few hours of their trip VERY interesting.
Jun 18 – 2011
We made it! — finally ..
Got to Vancouver airport to find out that our connection from Miami to Key West was messed up.  They couldn’t tag our bags thru because we only had 20 minutes to get off the plane – and race for the plane to Key West.  If we managed to do that – our bags probably wouldn’t!!  So we wisely decided to take American’s Airlines offer of a free night in Miami with our flight to Key West today at 8:30AM.  So that was plan #1… BUT, we get to Dallas/Ft Worth and 45 minutes later we board our plane for Miami.  It’s 101 degrees outside and so the walkway tunnel that runs outside to the plane is stifling hot and the plane is condensing up inside from the airconditioning.  But, no worries, we’re game for the heat!!.  We load 38 rows 6 people to each row, and the plane is FULL.  We all get on and the captain announces that the LAVATORY is malfunctioning and we can’t fly because the liquid condensation would form ice on the outside of the plane while we flew to Miami and could possible fall thru someone’s house
😦     so they therefore had to cancel the flight and TRY TO FIND ANOTHER PLANE.. emphasis on try.. everyone groans and the ones that weren’t groaning were already phoning AmAir for alternate flights, the guy beside us was quick on the draw and his first flight out was the NEXT day… This is looking real bad — the plane is now emptying out back into the tunnel, Randy and I get to the doorway of the plane and they announce that we ARE OK and are now flying.  Meanwhile the staff on the plane had voided the passenger list and boarding passes as they were now booking them on other flights.  An hour delay to get that sorted out, we, meanwhile, were back sitting in our original seats as we hadn’t got off the plane officially.  The other 150 people in the sweat tunnel had to wait for boarding passes and then replane. Away we go after the delay and we are now thanking our luck that we decided to stay in Miami as the 20 minute dash has been dashed by the delay.

We get to Miami and I wait by the luggage carousel while R goes to the ticket desk upstairs to get our voucher for the room.  He reappears not too long after to find that I’m still waiting for HIS suitcase to come out onto the carousel.  It DOESN’T show up so now we have to go make a luggage claim with this nice young latino lady who speaks 899 miles an hour, with an accent, and we can’t understand anything she’s saying.  We keep asking her to repeat herself.. we find out that the suitcase can be delivered to our hotel by 11PM IF IT SHOWS UP by then.  It’s now 9:30 PM so we’re pretty well thinking that that would be an impossible outcome.  Off we go to the Marriott to drink cold beer.  Get up this morning at 5AM so that we can shuttle back to Miami aiport, go back downstairs to lost and found luggage and hope R’s suitcase is somehow sitting there.  There’s crying people in front of us and angry people beside us and we finally get up to the counter and she saunters into the back room and locates R’s suitcase.  We were the only 2 happy people in the whole place.  We go now to check our bags in and we have another nice young Latino lady who speaks 901 miles an hour, with an accent, and we can’t understand anything she’s saying.  After an initial angry outburst from R because he says: ‘NO!!! I DON’T UNDERSTAND WHAT YOU MEAN’.. I said to her, ‘we’re having trouble with your accent!’, so she   s  l  o  w   l  y and   c   a   l   m  l   y speaks to us so we can understand that even though she’s tagging our bags WE have to take them across the airport and drop them off in a bagging area.  We did, we caught our plane to Key West and both suitcases travelled with us this time.

Our hotel is AWESOME, it’s on the Gulf side of the Key, it ‘s 12 blocks to the Atlantic side of the key so we’re happy to be here and it’s 90 degrees outside so we’re now inside in the aircon in our room taking a break after a day of exploring the streets.  Our first stop was to buy hats — and don’t you know we run into a black fellow, with no accent, who’s from MONTREAL selling hats.  The first thing he does is start talking about the Canucks losing to Boston, when they SHOUD HAVE WON the cup!!  I had to tell him to please stop torturing me with his analysis of Roberto’s poor goal tending, poor reffing, bla blah blah.  He hates BOSTON, and HATED that they won..  I couldn’t believe that we ran into a rabid hockey fan in the first hour that we were here.. that’s amazing.
Day 2 in Key West
Could have saved # on the sun screen as it was overcast all day — spent a few $ on water as the heat/humidity is still in the 80’s… (carol you would hate it here).. Toured the city on the hop on hop off bus, saw Ernest Hemingway’s house, and a 200 ft yacht in the harbour, ate lunch at the Hogs Breath Bar — it was a tourist trap, but it DID HAVE a mounted boars butt that looked authentic enough..

Oh ya!! Lime is my new favorite color, flavour and mood!!  I will always think of Key West when I see or smell a lime!! Yessssssssssss…

This is a copy of an email I sent to everyone after our first 10 days in Florida.
Hey everyone!  We’ve coined a new term since arriving in Key West – it’s called “The one drink wander“.  Our hotel in Key West is at the bar / restaurant end of Duval Street.  That means there’s at least a 6 block x 3 block area of bars and restaurants right outside our door.  So when we’re asked if we want another drink we reply: nope, we’re doing the one drink wander!  At first they don’t understand our accents, but once they do, they smile, smile again and wish us luck! 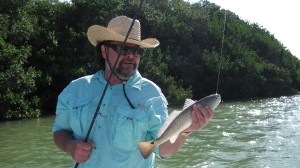 Tomorrow we’re booked on a ” party boat”. Goes out all day to the reef. I have to admit being just a liitle disappointed to learn that party didn’t mean “Par-Tay until the cows come home, but like: “how many are in your party?”. Haha. So looks like a big boat with everyone fishing off of it. Should be interesting!

It was INSANE! 20 people – each with a fishing rod – we (the boat) caught 200 yellow tailed snappers! Me? Well – I caught something called a porghy. I was ready to throw it back in, but the crew / guide got all excited and said no It’s edible, it’s delicious — so in the bucket it went for us to BBQ later.  Meanwhile I’m still hanging out in the shade jiggin with some other poor creature that I caught earlier—yank, reel, yank some more and after much sweating and grunting and people gathering around me, we see that I’ve got a 5foot – 200 pound nurse shark…I managed to get it up to the boat our crew guy / guide is amazed that I landed this thing without burning out his reel!! I guess all those Belize trips catching pelicans (yes, a Pelican) and stingrays came in handy today!  Before we let it go, I asked the guide to hold on while I took a couple of pictures AND a VIDEO.  So now I’m taking heat from Randy ’cause I managed to catch the shark, take a video, (with the same small camera) and an extra picture or two and Randy catches a 125 pound Tarpon (in the dark) and there’s nothing! No Video, no pics, Nothing!!! poor guy!! 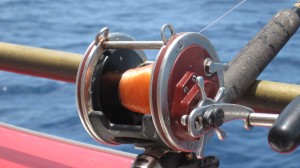 My Magic Reel that I caught my 6FT 200LB Nurse Shark with! 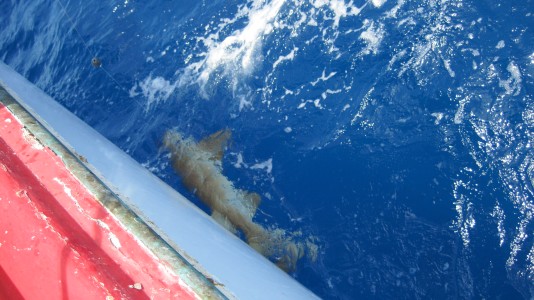 A quick picture of my Shark before they cut him loose!

That’s the end of our fishing stories for this leg of the trip, we’ve been driving around exploring some of the other Keys, but no other stories to tell.  We’re heading back to Key West tomorrow and have 2 fishing trips lined up there.  One is for Randy and I to go Tarpon fishing again and on Thursday Randy is heading out deep sea fishing for Mahi Tuna, maybe a sailfish, a dolphin, something like that.  I’m NOT going out there with him, I’ll wander Key West with my camera or something.  Haven’t made any decisions yet.  I’m sure we’ll end up with a story or two yet before we head home on Friday.