Well, what do you know?  We made it to the nations capital city of Ottawa.  What a great country we live in eh!   Our campsite was in Cantley, Quebec about 30 km outside of the City.  It always amazes me how you can drive 20 minutes away from a metropolitan area and be transported to another style of living.  Away from the bustle of traffic, people everywhere, tall skyscraper buildings, the noise of the city, the hectic energy and the feel of commerce.

Cantley was small, quiet and rural.  Our campsite was set in rolling hills, surrounded by farms and a few houses scattered around the area.  My 10 words of French that I remember from 3 years of straight A’s in school 45 years ago is tres’ rusty.  Good thing that most everyone around us can speak both languages and are happy to do so.  I admire their ability to switch back and forth when needed.  They always start with Bonjour and as soon as you say Bonjour back to them they switch to English because it is readily apparent to them that I AM NOT French..  sorry Mr. French Teacher from School, my accent still sucks.. haha.

The first evening there we ventured in to town and met with my high school friend Ingrid.  She lives in Ottawa and gave us parking instructions and a tour of her downtown neighborhood.  She walks to work and her area has everything you need.  Groceries, liquor, gas station, pharmacy, restaurants, museums.  Big City Life right out your door.  I always wonder what it would be like to live in a big city, to have so much opportunity for entertainment, shopping, and professional sports teams within a reasonable distance.  I’m sure I would bust my budget quite quickly buying tickets to everything that interested me.

We took the hop-on, hop-off bus tour of the city.  It took us thru Ottawa, over to Gatineau, along the Rideau Canal,  Justin Tudeau’s residence on Sussex Street, past the RCMP Musical Ride barracks and training ground and thru the ritzy neighborhoods of the Governer General and past the foreign embassies scattered near the Parliament Buildings.   Day 3 we decided to “park” downtown near the Parliament Buildings and wander around the grounds of Parliament, and walk down to Byward Market and stroll the streets looking around.  Sounds like a plan.  We are driving our Ford F150 down busy streets, some of them under construction and it’s BUSY.  We are 2 blocks from the Parliament Buildings when we spot a parkade that is OPEN.. wahoo Yabba dabba doo – I turn off the street and BLAM, there is a yellow bar looming inches away from the windshield indicating that the height restriction for this parkade is 5’8″ or something equally ridiculous.  No way is the truck going in there.  I put the truck in reverse and can hear a car horn behind me, luckily I stopped before backing over top of them.  I open my drivers door, stand on the running board, point to the low hanging yellow barrier bar and just as I am about to say something.  A Construction Guy yells “IT WON”T FIT”.  I guess he sees this kind of action all day.  The young lady in the car behind me is now yelling (in French) to everyone around her to back up and let ME back up.  Randy is out of the truck and directing traffic and now helping me back up without hitting anything to make our great escape.  End of story – we eventually found an open parking lot (not underground) about 10 blocks away and continued with our walk about.  Here are some of my favorite shots from Ottawa:

The Parliament Buildings, Rideau Canal Locks, the Ottawa River and Gatineau Quebec in the background. 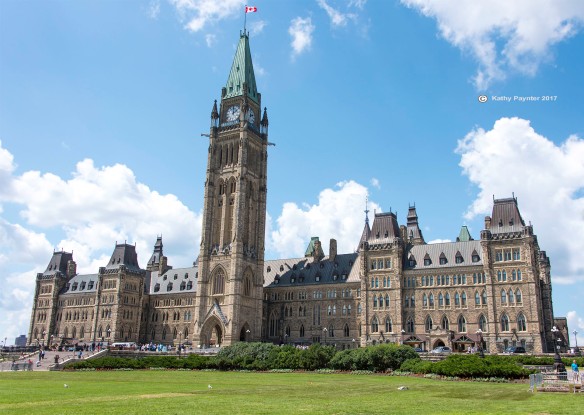 Botanical Garden in Gatineau, Quebec. One of the many structures there, all made from living plants, this one was about 30 feet high.