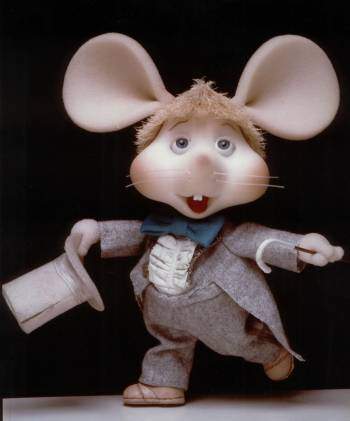 Topo Gigio – The cuddly little mouse with a big heart (a.k.a. “The Little Italian Mouse”) was the creation of the troupe of puppeteers that debuted on CBS’s THE ED SULLIVAN SHOW on April 14, 1963.Standing ten inches high and made of a half pound of foam rubber, Topo Gigio was controlled by sticks not strings (unlike most puppets). Three expert puppeteers manipulated Topo with their hands and three inch sticks while garbed in black hoods/black velour clothing, and working against a black backdrop (so they were invisible to the audience).

Each week, as part of the show, the adorable little mouse would appear on stage and greet the stone-faced Mr. Sullivan with a sugary “Hello, Eddie!”

Topo, who often spoke of his girlfriend, Rosey, closed his weekly visits by saying “Keesa me goo’night, Eddie.” Topo appeared 92 times and closed the final 1971 episode of ED SULLIVAN SHOW.Topo also appeared in the Italian made-movie Le Avventure di topo Gigio – later released in the USA in 1965 as The Magic World of Topo Gigio.

Although finished in the states, Topo Gigio found new fame as his creators introduced their friendly mouse in South America, Spain, Japan.

Topo appeared on a weekly Italian TV show and a 1980s Japanese produced animated series called TOPO GIGIO where Topo played a space exploring mouse who accidentally but returned to earth 400 years in the future.

On October 26, 2004, Studio Latino (a division of Ventura Distribution) distributed a Christmas video recording in the US entitled “El Show del Topo Gigio: Especial de Navidad,” featuring puppet Topo Gigio who has been popular with Latinos for three generations.

According to Conception Lara, the SVP of business development and marketing at Studio Latino, Topo Gigio is so loved because “he represents a tenderness that we would all like in our lives.” Select English versions of the Topo Gigio videos are slated for release in the Spring of 2005.

TRIVIA NOTE: In Chicago, on 1516 N. Wells Street, there is a popular eatery called “Topo Gigio Ristorante” that uses the image of Topo Gigio the mouse for its logo.